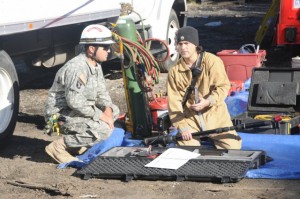 It brings federal, state, local and municipal agencies together to realistically test interagency operability during a crisis impacting the District of Columbia, Virginia, and Maryland.

It also trains and prepares the Department of Defense to provide defense support to civil authorities and employ appropriate force protection measures as requested.

More than 38 participating agencies from DOD and capital region response agencies will perform mock mass casualty rescues, Defense Support to civil agency technical rescues and law enforcement tactical responses. The goal of the exercise is to ensure government agencies at every level are prepared to coordinate action to protect the public in the event of an actual disaster in the National Capital Region.

This is obviously a drill; the timing, too, is suspect. None of what is claimed is believable. It’s all props and fakery. Let anyone prove otherwise.

The accuracy of the findings of the videographers has not yet been fully assessed, but good points are made which are worth investigating. More as soon as possible. Car footage does seem to differ from the still images, but other side cannot be seen. The still image appears to be in another part of the city: needs to be confirmed.

As pointed out by one poster all that is broadcast is claims. No legitimate witness places Carey in that car or an 18-month-old. Nor is there a single eyewitness who claims to have seen her shot dead. Nor is there any witness of video or photo of a corpse. Nor any kind of body being drug out of the car. Nor is there CCTV camera footage of the car striking a barrier.