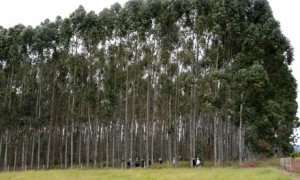 It’s a timber company’s dream but a horrific industrial vision for others: massive plantations of densely planted GM eucalyptus trees stretching across Brazil, South Africa, Indonesia and China, engineered to grow 40% faster for use as paper, as pellets for power stations and as fuel for cars.

The prospect is close, says Stanley Hirsch, chief executive of the Israeli biotech company FuturaGene. All that is missing, he says, are permissions from governments for the trees to be grown commercially, and backing from conservation groups and certification bodies.

FuturaGene has spent 11 years trialling thousands of GM eucalyptus and poplar trees on 100-hectare plots in Israel, China and outside São Paulo in Brazil, and is now at the last stages of the Brazilian regulatory process for commercial planting. Thanks to a gene taken from the common, fast-growing Arabidopsis weed, the company has found a way to alter the structure of plant cell walls to stimulate the natural growth process. The company says its modified eucalyptus trees can grow 5 metres (16ft) a year, with 20%-30% more mass than a normal eucalyptus. In just five and a half years they are 27 metres high.

Hirsch claims the gene-altering technique is an industrial “game-changer” and integral to the UN’s vision of a future “global green economy“.

“Our trees grow faster and thicker. We are ahead of everyone. We have shown we can increase the yields and growth rates of trees more than anything grown by traditional breeding. Potentially, we believe this [development] can displace the whole fossil fuel industry. The technology can be adapted to any trees. We can have a whole new supply of fuel. Yes, I do want to save the world.”

GM trees have been grown experimentally since 1986 but despite more than 700 field trials, mainly in the US on eucalypts, pines, poplars and fruit trees, European and US legislation has delayed permissions and very few have ever reached the market. Papaya, a few plums and some pine trees with genetically engineered viral resistance have been approved in the US, but only China, which has planted more than 1m GM pines, has given permission for them to be grown on any scale.

The next step for FuturaGene comes in just over a year, when it expects to submit its final biosafety dossier to the Brazilian government. If successful, it should get permission to grow the trees commercially by 2015.

Posted in GMOs | Leave a response