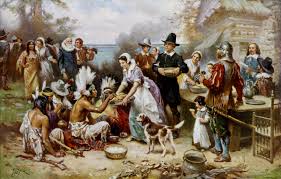 I love Thanksgiving, but I don’t for a moment think that it’s anything but a somewhat phony and artificial holiday. Since it is our only true de facto two-day holiday more than makes up for any flaws. But let’s not be fooled by the Pilgrim nonsense.

The term thanksgiving was brandished throughout US history and officially codified by Lincoln in 1863 at the behest of an activist/writer named Sara Hale. Before 1863 there was no Thanksgiving per se, but a lot of proclamations giving thanks for this and that, all called Thanksgiving.

There were virtually no Thanksgiving events from the Thomas Jefferson administration until Sara revitalized the dying idea. Her rationale was that Americans didn’t have enough holidays. The Lincoln Thanksgiving was justified as a celebration of the North’s victory in winning the battle Gettysburg and had absolutely nothing to do with Pilgrims or anything of the sort.

That nonsense was all reverse engineered by sentimentalists. Even the first supposed ‘Thanksgiving’ in 1621 was a three day one-shot party modeled after something called Harvest Home. It wasn’t called Thanksgiving. Harvest Home was a end of the harvest party celebrated in parts of the British Isles. This party didn’t happen again and, in fact, [as cited here], most of the invited Indian guests to the 1621 event were later butchered by the growing population of settlers.

One documented ‘Thanksgiving” [cited here] was for a one-shot celebration to be held on June 20th. 1676, Thanksgiving was used more as a generic term for taking a ad-libbed holiday. There were some references to it being an occasional homage to the Pilgrims now and then, but most people thought it that part was silly. Jefferson was particularly annoyed by the notion.

Again it was Lincoln who made it a yearly event and also made it stick to the fourth Thursday in November. It only changed for two years during the Franklin Roosevelt administration and moved up a week in hopes of stretching the Christmas buying pattern an extra week in hopes of helping the economy.

It was already a known fact that Thanskgiving was the kick off to Christmas buying. A slew of half-baked traditionalists found the Roosevelt change an abomination since it somehow insulted Pilgrims or the D.A.R. or who knows who and was changed back after two years of bickering.

You can read the various links in this post and try to get a handle on this holiday which never really existed in this form until Lincoln. That said there were a few Federal proclamations declaring Thanksgiving for celebratory purposes. The first was in 1777, then randomly in 1795, 1798, 1799 and 1815. You’ll find most of these war-related.

A good history that documents a 1619 celebration too