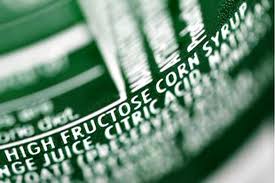 I am in awe of the recent TV commercials where two mothers are talking and one questions the other about serving some sweetened fruit punch to her kids.  The first mother says, “That stuff’s got high fructose corn syrup in it, and you know what they say about that.”

To which the second mother replies, “What?  That it’s natural and made from corn? And that in moderation, it’s perfectly fine?”

In the beginning, there was plain old table sugar, also known by its scientific name, sucrose.  Sucrose is a disaccharide (“di” meaning “two,” “saccharide” meaning “sugar”).  That means it’s actually a blend of two “simple” (mono) saccharides, in this case glucose and fructose.

Take a molecule of glucose and a molecule of fructose, link them with a chemical bond and presto, you’ve got yourself a molecule of sucrose.  Put a bunch of those sucrose molecules together in a bowl, place the bowl on the table at the local diner with a little spoon in it, and you’re in business.

Now it’s pretty much a given that high intake of sugar is bad for you, and a list of all reasons why would pretty much fill a book, so let’s save that for another day.  But what’s interesting is that a fair amount of research has been done investigating exactly which of the two components of sugar is worse for you—glucose or fructose.  And the hands-down winner in the “this stuff is bad” category is…fructose.

Fructose is a naturally occurring fruit sugar found, for example, in an apple.  In this form, fructose is absolutely fine.

When fructose is found in its original setting (like an apple or a berry), it’s surrounded with healthful nutrients like phytochemicals and fiber.  When it’s extracted and made into a liquid sweetener, it’s a complete nightmare.

More than any other kind of sugar, fructose raises triglycerides—a serious risk factor for heart disease.  In 2000, Canadian researchers at the University of Toronto fed a high-fructose diet to rodents that have a fat metabolism similar to our own—Syrian golden hamsters.  In a matter of weeks, the hamsters developed both elevated triglycerides and insulin resistance.

Fructose has also been linked to non-alcoholic, fatty-liver disease.  Rats that were given high fructose diets developed a number of undesirable metabolic abnormalities including elevated triglycerides, weight gain, and extra abdominal fat.  So it’s no wonder it contributes mightily to creating new fat on your body.

Interestingly, fructose does not raise blood sugar very much, leading to the wrongheaded idea (popular for a while) that it’s a “good” sugar for diabetics.  It’s not.  It’s bad news.

From Bad to Worse…

Now in the “olden” days, sugar—table sugar that is, plain old sucrose—was expensive.  Not maybe for the average Joe picking up a bag at the grocery store, but for food manufacturers wanting to sweeten products, it was definitely a high-ticket ingredient.

Between sugar tariffs that drove the price of sugar higher and corn subsidies the forced the price of corn lower, a perfect environment was setup to allow food manufacturers to find a solution to the problem of expensive sugar.  Enter high fructose corn syrup.

Take a subsidized crop (like corn), perform a bunch of chemical operations on it, and voila, you had something that was even sweeter than sucrose at a fraction of the cost.  Better yet, it could be added to virtually everything on the table, making those items even more “delicious” and desirable and, of course, moving more product.

But the problem is that it’s everywhere.

“The low cost of high fructose corn syrup allowed the explosion of 20-ounce sodas, super big gulps and the like to happen,” says C. Leigh Broadhurst, PhD, a research scientist and nutritionist at the USDA.  “Because sucrose was quite expensive, for years, sodas were limited to the 12-ounce can.  We have also had an explosion of candies, bakery items, and ice cream novelties, which would have been just too costly if they were all made with sugar.  But now, because of high fructose corn syrup, these items are much cheaper to produce.”

So, no matter how you cut the HFCS-sweetened cake, we’re now consuming more fructose than ever.  And refined fructose-—whether we get it from table sugar or from the ubiquitous HFCS—is bad news for your health.

When the Corn Refiners Assocation fights back with their “pro-HFCS” ads, it seems to come down to two arguments: One, it’s no worse than sugar (OK maybe, but that’s like saying Salems are no worse than Marlboros), and two, it’s natural because cause it’s made from corn.

Maybe so, but so is ethanol, and I’m not drinking that either.  And speaking of things I’m not doing, let’s add agave to the list.

It’s easy to understand how agave syrup got its great reputation.  Even the word agave has a fine pedigree, coming from the Greek word for “noble.”  The “blue” agave species—considered the best for the making agave nectar—flourishes in rich volcanic soil.  (It’s also the only variety permitted in the making of tequila.)  And extracts from the agave plant have been shown to have anti-inflammatory and antioxidant properties.

Unfortunately, there’s zero evidence that any of those compounds are present in the commercially made syrup.

Agave nectar is an amber-colored liquid that pours more easily than honey and is considerably sweeter than sugar.  The health-food crowd loves it because it is gluten-free and suitable for vegan diets, and, most especially, because it’s low-glycemic (we’ll get to that in a moment).  Largely because of its very low glycemic impact, agave nectar is marketed as “diabetic friendly.”   What’s not to like?

As it turns out, quite a lot.

Agave nectar has a low-glycemic index for one reason only: it’s largely made of fructose.  In fact, with the exception of pure liquid fructose, agave nectar has the highest fructose content of any commercial sweetener.  It is a whopping 90 percent fructose, nearly twice as high as HFCS!

In the agave plant, most of the sweetness comes from a particular kind of fructose called inulin, which actually has some health benefits (it’s considered a fiber).  But there’s not much inulin left in the actual syrup.

In the manufacturing process, enzymes are added to the inulin to break it down into digestible sugar (fructose), resulting in a syrup that has a fructose content that is, at best, 57 percent and—much more commonly—as high as 90 percent.

“Agave syrup is almost all fructose, highly processed sugar with great marketing,” says Dr. Ingrid Kohlstadt, a fellow of the American College of Nutrition and an associate faculty member at Johns Hopkins School of Public Health.  “Fructose interferes with healthy metabolism when (consumed) at higher doses.  Many people have fructose intolerance like lactose intolerance.  They get acne or worse, diabetes symptoms, even though their blood [sugar] is okay.”

Agave nectar syrup is a triumph of marketing over science.  True, it has a low-glycemic index, but so does gasoline—that doesn’t mean it’s good for you.

If you simply must have some sweets, a small amount of agave nectar every once in a while isn’t going to kill you.  Just don’t buy into the idea that it’s any better for you than plain old sugar or HFCS.

And remember, no matter what exotic name they give it or how natural and harmless they try to make it sound, sugar is sugar is sugar.

Eat more sugar and its substitutes if you want to accelerate your aging, develop chronic diseases, add several inches to your waist and sap yourself of energy.

Eat less sugar and its substitutes if you want to slow down the aging process, maintain vibrant health, retain a slim and trim figure and enjoy boundless energy.