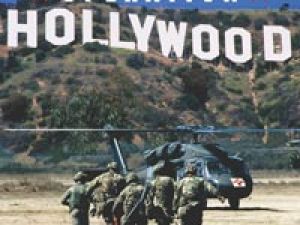 When philosopher George Santayana said “those who cannot remember the past are condemned to repeat it,” he meant it as an admonition — not as an endorsement of mass amnesia or historical revision. This should be obvious. Yet those operating at the shadowy intersection of the Pentagon and Hollywood either don’t understand – or more likely, refuse to understand — the thrust of the aphorism. Instead, with this week’s release of a much-awaited film, Santayana’s omen has been transformed into a public mission statement for a burgeoning Military-Entertainment Complex.

Since 1986?s “Top Gun” rekindled the Pentagon-Hollywood relationship from its post-Vietnam doldrums, the collusion between the military and the entertainment industry has become a blockbuster con, generating huge benefits for both participants — and swindling the American public in the process.

The scheme is simple: The Pentagon allows studios to use military hardware and bases at a discounted, taxpayer-subsidized rate. In exchange, filmmakers must submit their scripts to the Pentagon for line edits. Not surprisingly, those edits often redact criticism of military policy, revise depictions of historical failures, and generally omit anything else that might make audiences wonder if our current defense policy is repeating past mistakes.

Posted in Military | Leave a response