The Pentagon’s grip on Hollywood 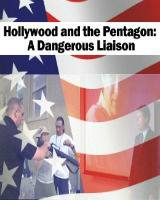 The military entertainment complex is an old phenomenon that binds Hollywood with the US military. Known as militainment, it serves both parties well. Filmmakers get access to high tech weaponry – helicopters, jet planes and air craft carriers while the Pentagon gets free and positive publicity.

The latest offering to come from this relationship is Act of Valor and it takes the collaboration one step further. The producers get more than just equipment — they have cast active-duty military personnel in the lead roles, prompting critics to say the lines have become so blurred that it is hard to see where Hollywood ends and Pentagon propaganda begins.

Posted in Military | Leave a response