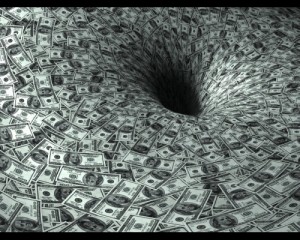 Walter Burien is the pioneer for communicating that government-claimed budget deficits are criminal lies of omission when compared with colossal tax surpluses revealed in their Comprehensive Annual Financial Reports (CAFR).

The crime of economic fraud is a state governor with fiduciary responsibility failing to clearly communicate this tax surplus over 35 times the claimed deficit, and to submit this data for independent economic cost-benefit analyses for public consideration of all our options.

When all California local governments’ CAFR surplus accounts are totaled, Californians have been overtaxed by $8 trillion dollars in a sampled study of the more than 14,000 government entities.

The criminal fraud expands with Governor Brown vetoing a bill that would document the state’s ability to create at-cost credit through a state bank, and failing to communicate the success of North Dakota’s state-owned bank producing increasing budget surpluses.

Most Americans are unaware that this is really how the “1%” play the game of power and control. My 18 years’ experience working with both parties’ “leadership” in attempt to end domestic and global poverty proved that they will break every promise (public and private), and lie through corporate media control.

The objective and independently verifiable facts disclosed in public CAFRs require no belief, just verification of the data. The endgame of this massive manipulation of the 1% is the 99%’s recognition that the facts prove the 1%’s crimes, demanding their arrests, and then having good-faith public consideration how we can best build a brighter future.

Walter explains the purpose of this “game” (slightly edited), with a proposed solution that can, and should, be considered by independent cost-benefit analyses to fully understand our options:

Diversification and achieving the highest rates of return has always been the-name-of-the-game for the inside players.

History has proven time and time again that wars, recessions, depressions, boom or gloom has always been very profitable for the select gang of controllers calling the shots and orchestrating events.

The off-shore game of taking advantage of 3rd World cheap labor started into full swing back in 1982 with CALPERS going into CALPERS International.

From the get-go taking advantage of cheap foreign labor and manipulating of foreign governments through what I call massive Global Management Funds was VERY profitable. Trade policy such as NAFTA, GATT, etc. were designed specifically to accentuate those profits. Mexico was the first target at the end of the 80’s, then the Soviet block countries in the 90’s, and then the big cherry China starting in 2000.

It all boils down to “Greed” and “Opportunity” “Unrestrained.”

No ifs, ands, or buts involved; only closed door discussions on the next acquisition takeover for massive profit. Appeasing, entertaining, misdirecting, and distracting the population from viewing or having any basic cognitive thinking per the wealth amassing within government on all levels was worked into a fine-tuned Stradivarius violin concerto.

The public has always been the mark for the last 10,000-years. The how and method by the financial / industrial complex in cooperation with government controllers has just been refined as the ticking of the clock continues. The public has not stood an ice-cube’s chance in hell with the financial/industrial complex teamed up with government to utilize the public as a productivity resource to be drained and managed. Social engineering has been designed to facilitate the conditioning of the public to shut-up, follow instructions, and do what they are told.

The problem with you, I, and all the rest is having been conditioned to not cutting-out the clutter and distractions where our focus is broken from the fundamental basics of allowing government operatives, others to build their fortunes from within government to the population’s severe disadvantage.

A basic example is in California: The “County” of LA had a budgetary basis in 2007 of 17.5 billion dollars. From 2008 to 2011 the county of LA promoted how they were pulling-in the belt and cutting back expenses. Stories of lack of funds flew through the news and political party streams. The realty of the situation was from 2007 to 2012 (five-years) LA County as seen in their CAFR increased their budgetary income from 17.5 billion to 25.8 billion dollars, an increase of 8.3 billion or a 47% increase as they promoted to the population they were in dire-straits and cutting-back.

It does not take a genius to see the basics at work here per the local government of LA County’s wealth-base increase of annual income as the population is driven further into poverty. To allow the public to be distracted or misdirected away from such an overwhelming basic fundamental is unacceptable in any light.

We are all working on trying to bring the “basics” of the wealth involved ever building within government into view. We all have done our part as megaphones attempting to kick the public in the ass to wake-up and look.

Looking is one thing. Comprehending is another. With that next step being the hardest of all: Correcting the situation in the “Public’s” behalf.

I know all too well that it will NEVER happen as long as the financial/industrial complex is teamed up with government to utilize the public as a productivity resource to be drained and managed.

The ONLY way the force necessary to modify the situation is accomplished is to put the public, the financial/industrial complex, and government all on the same page with the same common objective. That scenario has not existed from the get-go.

The common denominator that makes it happen is by making the population the “First-Line-Beneficiary” of the investment arena returns through and by utilizing that massive and ever-growing government investment return as a “written in stone” objective to meet governments’ general purpose operating budgets as ALL taxation is incrementally and systematically phased out. Government has its own management teams in place today to make this happen tomorrow.

With this being done, all three power structures are now on the same page, with the same common objective being a prosperous economy for one-and-all.

Government’s intent in relative transition changes towards the population from one of: Draining and managing, to one of wanting to see the population as wealthy and prosperous as they can be. In doing so, all prosper and not just the financial/industrial complex in joint partnership with government.

With the population as the first-line-beneficiary with the set objective being the elimination of taxation through investment return / enterprise contribution, the “playing field” is leveled for the first time in history, of which in most probabilities will lead to a thousand-years of prosperity for one-and-all.

The end of 2012 will be the beginning of a new world with the first local government venues establishing the principle of eliminating taxation through what I have called the TRF (Tax Retirement Funds). The TRF prospectuses will have what I call the twelve-points that will be in effect written in stone as core principles not to be deviated from. The basics of the first four-points simplified are:

What the country faces under the last several decades’ course within government is economic collapse. TRFs bursting forward coast-to-coast building what would be virtual unlimited capital reinvestment under sound principles opens the door for true growth and “stable” economic prosperity.