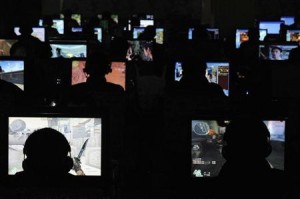 Peter Thiel, former owner of PayPal and current member of the Steering Committee of the Bilderberg Group, also owns Palantir Technologies, Inc. (PT), a software corporation that produces platforms for Java and web-based systems that analyze integrate and visualize digital data of all kinds.

PT provides software that solves “technical problems” like “combating terrorism, prosecuting criminals, fighting fraud and eliminating waste.” While they claim to support open software, they collaborate with the US government to facilitate spying on users of the internet.

Thiel is one of the co-founders of PT, which got their venture capital investments from In-Q-Tel, the Central Intelligence Agency (CIA) domestic intelligence gathering corporation working as a shell for the federal agency. Thiel put up $30 million of his own cash which was taken from the Founders Fund. PT headquarters are the former buildings that housed Facebook in Palo Alto, California.

PT has worked extensively with In-Q-Tel, and partnered with Thomson Reuters for product development, as well as collaborated with computer scientists who are affiliated with intelligence agencies worldwide.

Anti-fraud experiments at PayPal gave Thiel the inspiration to build software that would view each individual transaction as part of a larger pattern and therefore predictable through networks of predictive software. This software could mine a user’s computer for detailed data that would enhance the predictive algorithms.

Within the US, the CIA, Federal Bureau of Investigations (FBI) and National Security Agency (NSA) are legally banned from conducting surveillance missions on US citizens without warrants; however with the creation of front companies like PT, they can circumvent the legalities and continue to expand their Big Brother operations.

In 2010, with approval of the Office of management and Budget and Vice President Joe Biden, PT was given contractual control over data sourcing for federal agencies such as Medicare and Medicaid.

PT conducts extensive data mining wherein the US government, through these federal agencies and shell corporations, can peep into the private lives of citizens without their knowledge or consent. Where the gaps exist because of bureaucratic red-tape, PT provides comprehensive intelligence, allowing them to see beyond what the law permits.

The US Army Intelligence Command has complained that PT treats them like a customer, which degrades their expectations for having all-encompassing reach over intelligence gathered by PT. Other corporations involved with PT are Lockheed martin, IBM and Raytheon.

The Distributed Common Ground System – Army (DCGS-A) has spent $2.3 billion to become the armed forces primary source of data mining for intelligence and surveillance purposes. They utilize satellites, biometrics, and informants to build extensive dossiers on targets and recognized enemies-of-the-state.

DCGS-A is the second version of this group of intel analysts. Major defense giants had a hand in building the first version of DCGS. Now these talents are working for PT. After requests made by Lieutenant General Mike Flynn, former intelligence officer in Afghanistan and current director of the Defense Intelligence Agency (DIA) to perfect surveillance systems analysis capabilities, the Joint Urgent Operations Statement (JUONS) and the Pentagon Combating Terrorism Technical Support office (CTTSO) collaborated to hire PT.

PT Gotham (a.k.a. Palantir Government) is employed with regard to expansive data mining techniques that eradicate privacy considerations which have advocacy groups up in arms.

Special Forces and Marines immediately benefited from PT servers and quickly became the only sensible intelligence network employed by the US government. With the assistance of PT lobbyists, Congress kept funding flowing between the Pentagon and PT to ensure money for wartime data miners. PT advertises all across Washington DC and Virginia with more than $500,000 spent in lobbying techniques.

PT lobbyists have been influential in having legislation passed on Capitol Hill that benefits their industry.

For their service to the expansion of the American surveillance state, PT has received exclusive contracting with the Bureau of Immigration and Customs Enforcement (ICE) and the FBI with taxpayer monies going directly into the coffers of PT.

Another out-reach of government-approved surveillance is the PT owned website AnalyzeTheUS. Using chicanery, ATUS allows Americans to use PT Gotham and input private information into the site while monitoring their information on other government sponsored websites.

The financial side of PT resides in Palantir Metropolis. This software integrates data, information management and quantitative analysis. However it is directly connected to commercial corporations with proprietary stance with the expressed purpose of predicting trends in consumerism.

Thiel has had his hand in the Libertarian Movement, influencing the careers of both Ron Paul and Rand Paul with massive donations to their campaigns. In the Congressional home called Washington, DC, where money talks, Thiel knows how to get a message across. He has also invested in the floating cities of the future called Blueseed where the Elite will be able to enjoy the benefits of having their own sovereignty without having to answer to other nations.

Between his ties to the intelligence community, his contributions to the Bilderberg Group, and furtherance of independent nations for the world’s wealthiest, Thiel enjoys too much time in obscurity as alternative journalists pay little attention to the man who is playing puppet master.