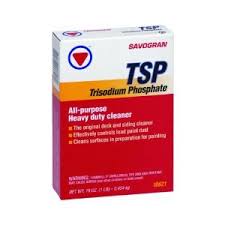 A lot of home builders and painters will know what tridsodium phosphate (TSP) is. But a lot of them don’t know that they eat it for breakfast!

Even though it appears right on the ingredients label, a lot of people don’t realize it’s an industrial cleaning agent. It gets worse (see below video), the government doesn’t even want you to clean with it because it’s considered bad for the environment. It’s an okay part of a complete breakfast though!