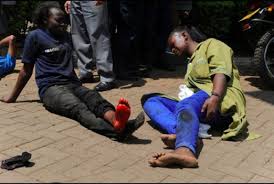 When I first heard yesterday that there was a massive shooting in a shopping mall in Nairobi, Kenya that killed supposedly 68 people, while injuring some 150+, I was my usual skeptical self…

Knowing what we know now by the fraud shootings and bombings in America at Aurora Colorado, Sandy Hook Connecticut, Boston Massachusetts, Washington DC (Yes, this one fits the pattern of being a fraud), and of course the shooting in London England just a few months back, anyone with any intelligence and with some critical thinking will question this shooting in Kenya immediately.

First, I want to present here an amazing video from Max Malone, that is entitled: “Kenyan Mall Hoax: The Camera Man Can” that is a must see by everyone… In it, you will see startling evidence that this mall shooting is another false flag operation, fully staged by actors.

Next Phase of the Economy