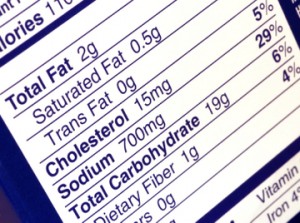 If the Nutrition Facts section on food packaging list all the substances that go into a food product, how can they deceive consumers? Here are a few of the most common ways:

This fools consumers into thinking the food product isn’t really made mostly of sugar while, in reality, the majority ingredients could all be different forms of sugar. It’s a way to artificially shift sugar farther down the ingredients list and thereby misinform consumers about the sugar content of the whole product.

Another trick is to pad the list with miniscule amounts of great-sounding ingredients. You see this in personal care products and shampoo, too, where companies claim to offer “herbal” shampoos that have practically no detectable levels of real herbs in them. In foods, companies pad the ingredients lists with healthy-sounding berries, herbs or superfoods that are often only present in miniscule amounts. Having “spirulina” appear at the end of the ingredients list is practically meaningless. There’s not enough spirulina in the food to have any real effect on your health. This trick is called “label padding” and it’s commonly used by junk food manufacturers who want to jump on the health food bandwagon without actually producing healthy foods.

A third trick involves hiding dangerous ingredients behind innocent-sounding names that fool consumers into thinking they’re safe. The highly carcinogenic ingredient sodium nitrite, for example, sounds perfectly innocent, but it is well documented to cause brain tumors, pancreatic cancer, colon cancer and many other cancers (just search Google Scholar for sodium nitrite to see a long list of supporting research, or click here to read NaturalNews articles on sodium nitrite).

Carmine sounds like an innocent food coloring, but it’s actually made from the smashed bodies of red cochineal beetles. Of course, nobody would eat strawberry yogurt if the ingredients listed, “Insect-based red food coloring” on the label, so instead, they just call it “carmine.”

Similarly, yeast extract sounds like a perfect safe food ingredient, too, but it’s actually a trick used to hide monosodium glutamate (MSG, a chemical taste enhancer used to excite the flavors of overly-processed foods) without having to list MSG on the label. Lots of ingredients contain hidden MSG, and I’ve written extensively about them on this site. Virtually all hydrolyzed or autolyzed ingredients contain some amount of hidden MSG.

Don’t be fooled by the name of the product

Did you know that the name of the food product has nothing to do with what’s in it? Brand-name food companies make products like “Guacamole Dip” that contains no avocado! Instead, they’re made with hydrogenated soybean oil and artificial green coloring chemicals. But gullible consumers keep on buying these products, thinking they’re getting avocado dip when, in reality, they’re buying green-colored, yummy-tasting dietary poison.

Food names can include words that describe ingredients not found in the food at all. A “cheese” cracker, for example, doesn’t have to contain any cheese. A “creamy” something doesn’t have to contain cream. A “fruit” product need not contain even a single molecule of fruit. Don’t be fooled by product names printed on the packaging. These names are designed to sell products, not to accurately describe the ingredients contained in the package.

This is by design, of course. Requirements for listing food ingredients were created by a joint effort between the government and private industry (food corporations). In the beginning, food corporations didn’t want to be required to list any ingredients at all. They claimed the ingredients were “proprietary knowledge” and that listing them would destroy their business by disclosing their secret manufacturing recipes. It’s all nonsense, of course, since food companies primarily want to keep consumers ignorant of what’s really in their products. That’s why there is still no requirement to list various chemical contaminants, pesticides, heavy metals and other substances that have a direct and substantial impact on the health of consumers. (For years, food companies fought hard against the listing of trans fatty acids, too, and it was only after a massive public health outcry by consumer health groups that the FDA finally forced food companies to include trans fats on the label.)

Food companies have also figured out how to manipulate the serving size of foods in order to make it appear that their products are devoid of harmful ingredients like trans fatty acids. The FDA, you see, created a loophole for reporting trans fatty acids on the label: Any food containing 0.5 grams or less of trans fatty acids per serving is allowed to claim ZERO trans fats on the label. That’s FDA logic for you, where 0.5 = 0. But fuzzy math isn’t the only game played by the FDA to protect the commercial interests of the industry is claims to regulate.

Exploiting this 0.5 gram loophole, companies arbitrarily reduce the serving sizes of their foods to ridiculous levels — just enough to bring the trans fats down to 0.5 grams per serving. Then they loudly proclaim on the front of the box, “ZERO Trans Fats!” In reality, the product may be loaded with trans fats (found in hydrogenated oils), but the serving size has been reduced to a weight that might only be appropriate for feeding a ground squirrel, not a human being.

The next time you pick up a grocery product, checking out the “No. of servings” line in the Nutrition Facts box. You’ll likely find some ridiculously high number there that has nothing to do with reality. A cookie manufacturer, for example, might claim that one cookie is an entire “serving” of cookies. But do you know anyone who actually eats just one cookie? If one cookie contains 0.5 grams of trans fatty acids, the manufacturer can claim the entire package of cookies is “Trans Fat FREE!” In reality, however, the package might contain 30 cookies, each with 0.5 grams of trans fats, which comes out to 15 grams total in the package (but that assumes people can actually do math, which is of course made all the more difficult by the fact that hydrogenated oils actually harm the brain. But trust me: 30 cookies x 0.5 grams per cookie really does come out to 15 grams total).

This is how you get a package of cookies containing 15 grams of trans fats (which is a huge dose of dietary poison) while claiming to contain ZERO grams. Again, it’s just another example of how food companies use Nutrition Facts and ingredients lists to deceive, not inform, consumers.

2. If the ingredients list contains long, chemical-sounding words that you can’t pronounce, avoid that item. It likely does contain various toxic chemicals. Why would you want to eat them? Stick with ingredients you recognize.

3. Don’t be fooled by fancy-sounding herbs or other ingredients that appear very far down the list. Some food manufacturer that includes “goji berries” towards the end of the list is probably just using it as a marketing gimmick on the label. The actual amount of goji berries in the product is likely miniscule.

4. Remember that ingredients lists don’t have to list chemical contaminants. Foods can be contaminated with pesticides, solvents, acrylamides, PFOA, perchlorate (rocket fuel) and other toxic chemicals without needing to list them at all. The best way to minimize your ingestion of toxic chemicals is to buy organic, or go with fresh, minimally-processed foods.

5. Look for words like “sprouted” or “raw” to indicate higher-quality natural foods. Sprouted grains and seeds are far healthier than non-sprouted. Raw ingredients are generally healthier than processed or cooked. Whole grains are healthier than “enriched” grains.

6. Don’t be fooled by the word “wheat” when it comes to flour. All flour derived from wheat can be called “wheat flour,” even if it is processed, bleached and stripped of its nutrition. Only “whole grain wheat flour” is a healthful form of wheat flour. (Many consumers mistakenly believe that “wheat flour” products are whole grain products. In fact, this is not true. Food manufacturers fool consumers with this trick.)

7. Don’t be fooled into thinking that brown products are healthier than white products. Brown sugar is a gimmick — it’s just white sugar with brown coloring and flavoring added. Brown eggs are no different than white eggs (except for the fact that their shells appear brown). Brown bread may be no healthier than white bread, either, unless it’s made with whole grains. Don’t be tricked by “brown” foods. These are just gimmicks used by food giants to fool consumers into paying more for manufactured food products.

8. Watch out for deceptively small serving sizes. Food manufacturers use this trick to reduce the number of calories, grams of sugar or grams of fat believed to be in the food by consumers. Many serving sizes are arbitrary and have no basis in reality.

9. Want to know how to really shop for foods? Download our free Honest Food Guide, the honest reference to foods that has now been downloaded by over 800,000 people. It’s a replacement for the USDA’s highly corrupt and manipulated Food Guide Pyramid, which is little more than a marketing document for the dairy industry and big food corporations. The Honest Food Guide is an independent, nutritionally-sound reference document that reveals exactly what to eat (and what to avoid) to maximize your health.